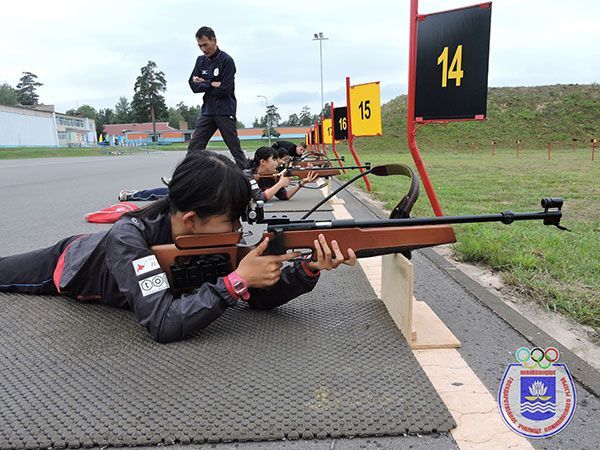 These days in Belarus are visiting young biathletes from Japan. Group of boys aged 12 to 14 years take in Novopolotsk School of Olympic reserve.

When in February of this year in Raubichi passed the Junior World Championships, Biathlon Federation of Belarus and Japan have signed an agreement on cooperation. Our party promised to share a wealth of experience. And the Japanese have expressed willingness to provide Belarusians training bases on the eve of the Olympic Games 2018 in the Korean Pyeongchang. Darya Domracheva and her teammates can go acclimated to the following games on the island of Hokkaido. The first passed from words to deeds Belarusians. Hand friendship young athletes from Japan stretched in Novopolotsk School of Olympic reserve. According to Director Valery Gushina RBM, to welcome guests they prepared long before their arrival: "put things in order in the hostel. In the room to put new furniture, changed the windows, plumbing. Thought out menu, the emphasis is on the Belarusian cuisine. Now they are happy to eat and pancakes, and pickle. Sometimes preparing fish dishes, although it will not surprise the Japanese. Met young athletes, as usual, with bread and salt. Then they asked: "And what to do with this gift?" In the evening, staged a tea party and showed that the loaf is not fake. Staying guests painted minute by minute. The main time devoted to training. Guests have passed safety, got acquainted with the shooting range and ski-roller track. We could hardly wait to take the rifle in his hands. They shot just lying, and some turned out quite well. Three boys and one girl covered five targets of five. Smart guys, very quickly assimilate information, seize all on the fly. Each lesson they take on the tablet. And as much as the photos was typed - not to count. We also something that captured before leaving cast off pictures on a flash card, which will give guests ".

It is no secret that in terms of information technology the Japanese - an advanced nation. It may well be that the most archaic stick to them. But the owners are not born yesterday: established in the territory of school Wi-Fi. And every step of the samurai in Belarus instantly recognized their relatives and friends on the other end of the earth. Shortly before these events Navapolatsk RBM from the national team of Belarus biathlon free, that is nothing, got a minivan. The initiative has shown the chairman of the Belarusian Biathlon Federation Valery Vakulchik. The vehicle had to be very helpful: what now has to go to the competition and carry on trips. In the center of handicrafts and traditional culture haired boys and girls tried on armor and straw hats. We visited the boys and ecological museum and the St. Sophia Cathedral in Polotsk
Версия для печати
Back
Share: